Not a Music Journalist but… I Dig Mr. Nice Guy 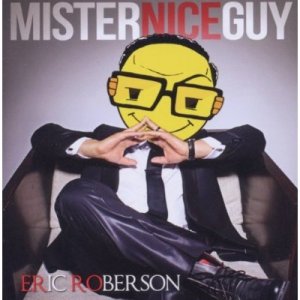 Oh, today’s R&B singers should be so nice as Eric Roberson.  Now since I’m not a music journalist I can say without shame that I came late to this brother’s music in fact I started listening to him about three years ago.  The first song I heard by him was Softest Lips and I nearly  passed out when I heard him sing it LIVE about two ears ago.  But I digress.  Having added Left and Music Fan First to the collection Mister Nice Guy was a no brainer.  “Erro” is a guy that really doesn’t require a preview of the album and Mr Nice Guy is no exception.   Here’s the track by track breakdown.

Mr. Nice Guy – Roberson is telling an old story about the good guy who never catches a break.  He contemplates just chasing the a** but decides to stick to his guns with the believe that the nice guy will find a nice girl.  The vocals sound effortless and the beat matches well with the content.
Strangers – The full circle of meeting someone, falling in love, breaking up and becoming strangers just like in the beginning.  The beat is bouncy, the organ and piano makes it feel “churchy”.  Roberson is singing a simple song that is catchy.
Summer Anthem – Never mind that I’m hearing this for the first time in December, it’s still a nice summer/happy jam.  Musically I’m transported to Change during Luther’s tenure. Chubb Rock has a verse on the cut and it’s just enough.
Come With Me – Um wow.  This is another “featuring” cut but the featured artists Yaw and Khari Lemuel are carrying this one.  So much so that I had to go and look them up.  Lemuel is the composer and is the featured vocalist on this song about hope and gratitude. In fact I have listened to this song four times.  The three vocalists together – beautiful.  This song is just too short.
Picture Perfect – This could be considered a Roberson standard.  This is HIS sound, tone, music and content as he waxes poetic about the perfection of a woman .  The inclusion of Phonte rhyming and singing, just brings it all home.  The video is pretty nice too.
Fall – Mr Nice Guy become Mr Lover Man.  The music and the vocal style betray, (or maybe not) the content.  The chorus says “we fall in love” but this sounds like seduction music.
Shake Her Hand – Love this little ditty about temptation.  The music sounds classic, puts me in the mind musically of Narada Michael Walden’s production for Chaka when she went out on her own.  Content wise, we are talking about Mr Nice Guy, so he took the advice of the wise man, shook her hand and walked away, because he’s got a woman at home. Hope that he has this one his live show.
The Magician – This sounds orchestral with the strings and a bit melancholy as he laments his inability to use his Roberdini skills on the ladies and puts me in the mind of something by Sting that I can’t quite recall right now.  Great fit of the sound and the story.
Love’s Withdrawal – You can call this “the sprung song”.  He’s fallen in love with his friend and can’t get his mind off of this woman.  Waiting on a call, a ring of a doorbell, dreaming about her.  Near the end, we get Omari Hardwick (I had to look him up too, he’s an actor) talking all kinds of lameness.  I suppose this cut right here is the one I could do without.
How Would I Feel? – The music is really secondary to the story in this case.  This man has gone into his woman’s diary, looking for something that he didn’t find and Jean Baylor (formerly of Zhane’) asks him how should she feel? Just dope.
Talking Reckless – Riding a nice groove as he sings about going out with his new flame, spotting his old flame with her new dude.  It’s an uncomfortable situation as he’s thinking about what used to be while looking at her.  He realizes that he needs to put those thoughts down.  This one can go on repeat, definitely.
At the Same Time – The beat puts me in the mind of Jill Scott’s The Way, which is all good since they all sort of came out of the same experience. A beautiful song about bad love timing.
Male Ego – A bouncy hip-hop beat with a great message, about letting the ego go and sticking with the one you’re with.  Hezekiah, a Philly emcee has two nice verses on this cut.  I’d like to say this is a good radio cut.
Try Love – This continues along the themes of Male Ego, letting brothers know that is okay to love and okay to express it.  Musically it has big modern percussion, with an old late 60s early 70s sound with the featured horns.  Another song that would be great in a live show.
All For Me – this is a beautiful pop song. The vocals, the soaring orchestration, the whole nine make this an academy worthy dedication song.  Hopefully he will be recognized for it.
The the musical styles vary, the lyrical content makes the album cohesive.  Mr Nice Guy will be in heavy rotation on all available music players in this house because it’s music that make sense, that sounds good and is good for the soul.  My hope is that with this release, Mr Roberson will capture a larger audience and be more appreciate for his musicianship.